0 Piedmont (Piemonte) Diaspora around the world 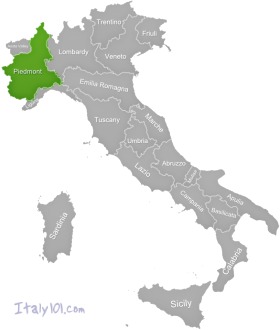 Piedmont, meaning “at the foot of the mountains”, is Italy’s second largest region. Located in the northwest corner of the country, it shares borders with the Italian regions of Liguria, Lombardy, Aosta Valley, and Emilia Romagna, as well as France and Switzerland. To get there, fly into Florence or Milan and take a regional train to the Peidmontese city of your choice.

The real jewel of this region is the grape. The purpose of Piedmont is the vino, and they take it seriously there. While not as famous for tourism as some of the other Italian ‘hotspots,’ Piedmont is a wine-lover’s paradise and surely worth a visit!

While Turin is the capital and largest city in Piedmont, you’ll get a better ‘taste’ for this area by making a one or two day visit to one of the smaller towns, like Asti. Plan to arrive on a Friday night or Saturday morning, in order to catch the once-a-week farmer’s market that takes place every Saturday morning until 1 pm. Wander through the stalls, selecting from traditional Italian cheeses and meats. Take your pick of five or six different kinds of tomatoes. Swing through the attached flea market for the random household item. Sit in the park for a picnic and enjoy the freshness of the foods from northern Italy.

When people hear Asti, they think “Spumonte,” or the sweet, soda-like sparkling wine that also hails from this northwestern corner of Italy. But the viticulture and vinification of this area encompass a much broader family of grapes and wines than the Spumonte. The Piedmont region is the home territory of grapes such as the Nebbiolo, Barbera, Dolcetto, Brachetto, and Moscato, which are used in the production of some of Piedmont’s most beloved wines like the Barolo, Barbaresco, to name a few. Twelve wines from this region carry the esteemed DOCG (Denominazione di Origine Controllata e Garantita) classification.

To truly enjoy Piedmont’s fruit of the vine, arrange a wine tasting at a local vineyard. The Bersano vineyard, located in nearby Nizza Monferrato, schedules detailed (and generous) wine tastings where you’ll not only taste and experience wines, but also learn about the history, process, and distinctions of the Bersano wine family.

When you arrive in Nizza Monferrato, you’ll be amazed that so much happens in such a small, seemingly lifeless town. But keep walking—the magic is inside. The Bersano family has constructed an outdoor museum of wine production that allows you to visualize the winemaking process—from vine to bottle—as it was carried out hundreds of years ago. After the educational part of your tour you’ll be led indoors to the highlight of your visit—the wine tasting. With five goblets before you, you’ll hear the history and philosophy of the Bersano winemaking family. You’ll try whites and reds, varying in the year of their vintage. With ‘oohs’ and ‘ahs’ you’ll swirl the wines in your mouth, trying to pick up the subtle hints of peach, strawberry, chocolate and apricot. Buy a few bottles to bring home and then catch the late afternoon train back to Asti.

Enjoy a late dinner (and perhaps another glass of that famous Piedmont wine) at one of Asti’s local osterias or enotecas specializing in local cuisine. Food lovers and adventuresome eaters will be interested to know that the Piedmont region is the home of the Slow Food Movement. Now an international organization, the Slow Food philosophy focuses on great tasting food that protects the land that grows it, and the people that produce, provide, and prepare it. The movement promotes traditional processes and artisanal methods of production. The movement encourages people to consider “the food they eat, where it comes from, how it tastes and how our food choices affect the rest of the world.” Don’t forget to indulge yourself in a truffle pasta—this prized mushroom is harvested locally and is another regional specialty that is not to be missed!

The next morning you’re back on the train to your next destination, but this short stop in Asti will be a sweet, if slightly fuzzy memory.

Isola Bella - a little earthly paradise, with its enchanting gardens, surrounded by the waters of Lake Maggiore. 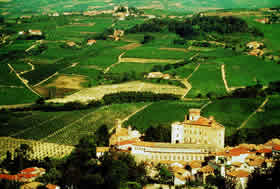 Piedmont, Orta San Giulio - in the middle of Lake Orta lies a small island with a convent.

Rivoli - an old residence of the House of Savoy, now a Museum of Contemporary Art and a conference venue. 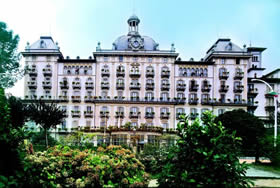 Stresa - the Grand Hotel des Iles Borromees has lost none of its Belle Epoque charm.