202,555 MCDONALD members around the world 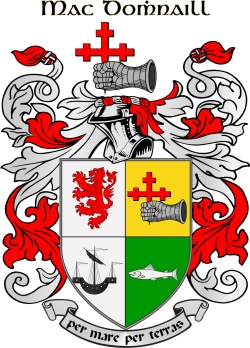 Design your own MCDONALD Family Crest

Mac Domhnaill- or in litriú nua, Mac Donaill, is anglicised MacDonnell, MacDonald, Macdonald, MacConnell, or those forms with the abbreviated 'Mc', as well as Donald, Donaldson, earlier McDaniell & c.The root of this surname is the personal name Domhnall- 'world mighty', Domnuill in Scots Gaelic, which is an ancient and frequent Gaelic first name.

The first statement must be that there are three distinct origins for this name in Ireland: 1) a branch of the Scottish clan MacDonnell/MacDonald; 2) MacDonnell of Thomond, a branch of the O'Briens; 3) MacDonnell of Clan-Kelly in present Co Fermanagh.Of course, lexically, the names are cognate, from the Gaelic name, but there is no genealogical connection between these three families.

Incidentally, the Scottish clan is of remote Irish origin, having come to Scotland with the 'Scoti' (latin word for the Dark Age Irish colonists of Caledonia, such as the tribe of the Dál Riada et. al.)

To take the Scottish clan MacDonnell/MacDonald first, their name would have been pronounced 'mac-hoonul' in Scottish Gaelic: it is likely that many Ulster McConnells have this origin.

As stated, they were by remote origin Irish Gaels, and their main branches were spread through the Islands and western highlands. The MacDonalds of Glencoe, infamously massacred by their guests, a Campbell regiment of the British Army, on 13th February, 1692, were conscious bearers of an Irish heritage they claimed to reach back to Conn of the Hundred Battles.

The clan Donald descend from Domnuill or Domhnall, grandson of Somhairle or Somerled, the lord of Argyll. (This first name was later used by the MacDonnells of Antrim, in the form 'Sorley'). As Lords of the Isles they became extremely powerful, from the 12th century onwards,vying with the lowland royal Stuarts for the control of most of Scotland.

Members of this Highland clan came to Ireland in the 14th and 15th centuries as 'galloglaigh' or gallowglass. These were heavily armed mercenaries used by the Irish chiefs and lords; in fact they were the elite soldiers of their time. According to Woulfe ('Sloinnte Gaedheal is Gall', 1923) they formed a military clan of their own and settled in parts of Leinster, notably in Cos Leix and Wicklow.

At the beginning of the 15th century Iain Mór, a son of the Lord of the Isles,came into possession of the Glens of Antrim, but it is likely that MacDonnells/MacDonalds had already been established in numbers there before this date.

The second family would be the MacDonnells of Thomond, descended, in all probability, from one Domhnall, a son of Muirchertach ua Briain who was king of Ireland in the 12th century. This surname, in the form MacDonnell, is well established in Co Clare and adjacent areas in Co Limerick etc.

The third family mentioned, that of Clan-Kelly in western Ulster, which I have read stated to be 'almost extinct' (MacLysaght, 'Irish Families' series, 1980, 1982). However, there is plenty of evidence for this name in Fermanagh in the 1659 'Census' figures below.

In Petty's 1659 'Census' of Ireland, the name is listed as a 'Principal Irish Name' in counties: (all figures are for families)

The returns for Co Wicklow are missing from the 1659 'Census'.

By the time of Griffith's 'Primary Valuation' of property in the mid 19th century, the name is listed as McDonnell and McDonald, and the top counties for each are as follows:

(In respect of the above figures, quite a number of families of 'Donnell' are to be found in Co Kilkenny in the 1659 'Census', as are McDonnell/McDaniell families in Co Cork. Figures for Louth are negligible. The returns for Mayo, Cavan and Tyrone are missing.)

In the 1890 births records, McDonnell was listed most in counties Dublin, Cork, Antrim, Mayo and Galway (247 entries); and McDonald in Dublin, Carlow, Antrim, Cavan and Wexford (191 entries).

Sorley Boy MacDonnell (1505-1590) chief of the Antrim clan, who resisted English incursions into his territory, successfully, during their Elizabethan heyday.

Tell us about any famous MCDONALD (or surname variant) you think we should add here. We will get our genealogists to check them out and add them to the list. Thanks!

Join the conversation with the MCDONALD tribe

My 4th great grandfather was William McDonald born in Ireland in 1809.He served in the British navy and went to Malta in 1835.

James (jas) was a sexton for the church of Ireland possibly at holy trinity Westport county mayo because he had son Joseph henry there on 4/6/1837 his other son was John michl baptised on 28/3/1843 in the parish of burriscarra diocese tuma county mayo .james spouse was Margt (margret)kelly .john Michael was my grandfather who migrated to Australia how and when unknown but he married three times first to Sarah Duggan in Narrabri n s w then to Maria Flanagan at Stanthorpe qld ,third my grandmother at Tenterfield frances Elizabeth grant in 1908 they had one son Robert renwick my father ,John died in 1920.

My name was Elizabeth mc Donald,Igrew up in gortaquill co cavan I believe my grandfather Patrick mc Donald originated from co Monaghan and moved to Cavanin in the 1850s when they were dividing up land, Would love to know more history of same

I have traced my family back to County Cavan Ireland through cemetery gravestone and 1821 Irish census. I would like to get further back and find out where the family originated. In 1821 census the family is listed as McDaniel. The Church records also list them as such. It is not until my grandfather that they are officially listed as McDonàld. The grave marker is recorded as McDonàld. Any suggestions?

(Part 1 of 3) The McDonald name has a long history in Ireland and now DNA can trace its origin to the north-western region of the Emerald Island. The McDonald story [dominated by DNA tribal marker R1b-L513, Subgroup B1] can trace their beginnings to the Finn Valley in Donegal, Ireland from 50 BCE. Perhaps the journey begins with the Clanna Dedad; Deda, son of Sen or Deda Mac Sin. The McDonald surname origin is from Clan Domnaill [DNA Tribe R1b-L513, Subgroup B1] and relations who remain in Ireland take the modern surname O’Donnelly, O’Donoghue and Hughes in Ireland.

(Part 2 of 3) According to research, the Domnaill name is also found in Brittany, France. It is a very old name which appears in the 5th century Roman inscriptions as Dumnovellaunos in Brittany meaning “Deep Valour” equivalent to Irish Domhnaill. But how could this be? Recent discoveries from DNA testing are unlocking the migration patterns of Celtic tribes as late as 800 CE to 1200 CE. The McDonald story begins in pre-history Ireland but relatives will then move to Wales where the family can be traced back to their Welsh tribe Cydifor Fawr. A descendant and many of his kin will then move to Brittany, France during the Dark Ages.

Write an email address and click 'Invite' to share this page with more members of the MCDONALD tribe.

Discover where the MCDONALD Family members live around the world

Show off the MCDONALD Family Crest…