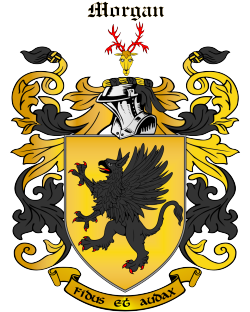 Design your own MORGAN Family Crest

Morgan is an ancient Welsh personal name which eventually developed into a surname. Its origins lie in Old Welsh or pre-Christian Brythonic (ancient Welsh/Celtic), deriving from the orginal name 'Morcant'. While the first element 'mor' can mean 'sea' in Welsh, it is uncertain if this part of the name has derived from this particular meaning, but 'cant' originally meant 'circle' or 'complete'. In this sense, 'sea defender' may be a reasonable theory as to its original meaning.

It was a very popular personal/given name in medieval Wales. Traditionally there were no surnames in Wales as children were always identified via their first name and their father's (or grandfather's) personal name. A son of a man whose given/personal name was Morgan would therefore have been known as 'ap Morgan' (meaning 'the son of Morgan'), while a daughter would have been known as 'ferch Morgan' (ferch meaning 'daughter of'). Settled surnames only widely came into existence in Wales between the 16th and 19th centuries, during which time the name 'Morgan' and a related form 'Morgans' came to be fixed as a surname.

The county of Glamorgan (Morgannwg in the original Welsh form) was named after princes called Morgan.

The surname is seen in greatest numbers in south Wales. At the time of the 1881 census, Breconshire was home to the highest number of Morgan families, followed by Monmouthshire, Glamorgan and Carmarthenshire. The surname is also seen in high numbers in the English counties that border Wales, including Herefordshire and Shropshire.

Tell us about any famous MORGAN (or surname variant) you think we should add here. We will get our genealogists to check them out and add them to the list. Thanks!

Join the conversation with the MORGAN tribe

Looking for Welsh and/or English descendants of Richard Morgan, b 1599 and Anne Morgan. Thomas, their son, was baptized at Kingsland, Herefordshire, UK. Feb 5, 1625. He moved on to America a few years after the Interregnum. As I understand it, we were Welsh. But I have scant information from this point forward.

Hi....my Morgan family are from Williamstown, Co. Galway. Ive been trying to trace the family of my great uncle, Sgt. Martin Morgan, who was born in 1876. He joined the RIC and was shot in an IRA ambush and died of his injuries on 27th Sept. 1920. He had been stationed in Waterford. As far as I know he had married a Protestant lady and they had two children. I have no other information on them. Would love to be able to make contact with any descendants.

Pelagius 354-418 the early Christianity theologian was born a Morgan. He was spoke of as an Irish Welsh monk and modern dna show all Morgans have a link with southern Irish Irish type 2 haplogroup

My family has done a family tree all the way back to 1700 where my grand father David Morgan died and buried in Gainesville Georgia . We do not know anything past that. We do know that he was not raised with his parents . He was raised with a Hollingsworth family.

My name is Hettie Pretorius and I am a decsendant of JOHN MORGAN in SOUTH AFRICA. We know nothing more of this ggreat grandfather of mine but JOHN MORGAN FROM IRELAND BORN 1828, gotten from his marraige to an afrikaans speaking lady with the name of GERTRUYDA JACOBA VILJOEN, and susiqiuently his children born in South Africa. The names JAMES HENRY, DANIEL PATRICK, HARRY WILLIAM, MARY ANN, THOMAS BENJAMIN. seems to be the names from the MORGAN side. Could anybody please point me in a direction on, where and how I can go about looking for any information on this elusive ancestor of mine. Thank yoy very much.Sorry he got Married in 1855 and his first son named JAMES HENRY was born in 1856 in what was known the ORANGE FREE STATE in SOUTH AFRICA. Hettie

My Morgan Ancestry points me towards the Counties Cork and Kerry, and I do believe that the surname Sullivan may be prominent as well, in my family tree, but I haven't found any concrete proof, of this. However my knowledge of the Morgan surname has only taken me as far as London, England, in a time about 1892, as then is when my grand father Frank (Francis) Morgan was born. I lose the trail there though, because I am not sure of his birth records, or the names of his parents. He was found on the streets of London, practically a street urchin or orphan, and shipped to Canada about age 10 (in 1903) to be adopted or indentured with a Canadian family. This was done through the Catholic church based in Ottawa, Canada. He later married and raise

The Morgan name has a long history in Wales, but now DNA and some recorded history says their origin is from the Emerald Island. The Morgan story [dominated by DNA tribal marker R1b-L513, Subgroup B2] can trace their origins to the Finn Valley in Donegal, Ireland from 50 BCE. Perhaps the journey begins with the Clanna Dedad; Deda, son of Sen or Deda Mac Sin. The Morgan surname origin is from Clan Domnaill [DNA Tribe R1b-L513, Subgroup B1] and relations who remain in Ireland take the modern surname (O’)Donnelly, McDonald and Donohue in Ireland. The Domnaill name is also found in Brittany, France according to research from the Centre de Recherche Bretonne et Celtique. It is a very old name which appears in the 5th century Roman inscript

Areas of Origin for MORGAN

Write an email address and click 'Invite' to share this page with more members of the MORGAN tribe.

Discover where the MORGAN Family members live around the world

Show off the MORGAN Family Crest…